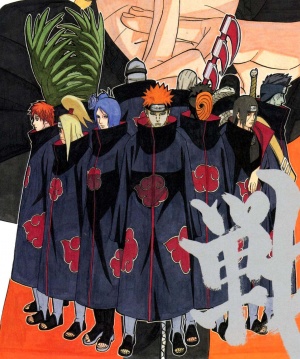 Akatsuki is a villian-like organization of S-ranked missing nin. Their aim is to collect all the bijuu, by killing the hosts and sealing them away.

The Akatsuki play a little part in SL, only appearing in Otogakure after a certain amount of Orochimaru Kills. According to how you "use" them, they may actually play a big role in the game for you. Will you take part in their devious deeds or will you stray away and not join their ranks?