Water Country is one of the smaller shinobi countries. It is a watery island, far from most others. In Water Country lies Kirigakure no Sato, one of the 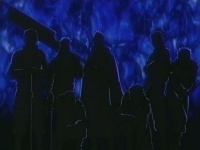 Seven Swordsmen of the Mist

strongest ninja villages in the world. Led by the Mizukage, most wars that Kirigakure no Sato face are civil wars within it's own

borders. During these civil wars most of the clans of Kirigakure have been wiped out or slaughtered by the citizens after they were blame for the power struggles.

The characters of note are of course the Seven Swordsmen of the Mist. They are the elite, large sword carrying ninja who perform covert operations. Three of their key members, Hoshigaki Kisame, Momochi Zabuza and Kurosiki Raiga, have all left the Seven Swordsmen and have become missing nin of the Hidden Mist (Zabuza leaving with Haku, Kisame joining Akatsuki, and Raiga fleeing with Ranmaru).

Kirigakure plays the role of a "general" village in SL. The county lies far away from most other locations so it's quite hard to travel to. It happens to be hotspot for chit-chat with most of the Mist Ninja. Those who choose to be a Mist receive +1 defense, +2 dexterity, and Kirigakure as their home country. Kirigakure can be a great hiding spot and who knows, maybe one of the Seven Swordsmen will welcome you in as a Mist Nin. It has also been rumored that the ANBU within Kirigakure are corrupted and seek out the "good" shinobi and kunoichi.