The Fire Country is one of the largest and most powerful of all shinobi countries. It is characterized by it's forests, explaining the "hidden in the leaves" part. It is the center of Naruto, bordering most of the other countries.

In it lies Konohagakure, the home of most main characters. The Leaf Ninja have been seen to always protect fellow Leaf Nin and seek to protect everyone within their village.

War is struck the Leaf many times, but now they are aligned with most other countries. 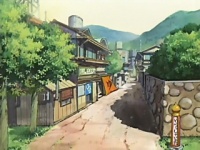 Many important events happened in Konohagakure. Long ago, Kyuubi attacked and it took the sacrifice of the Hokage and Madara's skills to put the demon into a newborn child by the name of Naruto. The Uchiha Massacre also occurred in Konoha where all of the Uchiha except Sasuke were killed by Uchiha Itachi. Then not too long ago, Orochimaru led the Sand and Sound Ninja in an invasion of Konohagakure. There were many Leaf casualties in the battle, but they managed to hold off the Sound and Sand while the Hokage took on Orochimaru, sealing his arms with the Shinigami.

Also, most of the characters of Naruto were born in the Konohagakure. It is the main village and includes characters such as Jiraiya, Uzumaki Naruto, Hatake Kakashi, Tsunade, Sarutobi, Haruno Sakura, and many more.

Konohagakure plays the role of a "general" village. The majority of SL characters are Leaf Ninja, having Konohagakure as their home village, +1 defense, and +2 strength. In Konohagakure are some unique places such as the Library or the Spas. Konoha is also an easily traveled to place and an important link to other important places.