The original Orochimaru is the basic enemy during a long time in the original Naruto series. 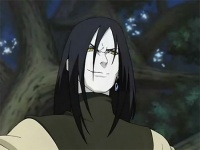 He is basically the arch-enemy Naruto has, before Sasuke's actions.

Orochimaru was a former Legendary Sannin and student of the Third Hokage. There was a problem, Orochimaru had a desire for power within him. Thus, he left the Third Hokage's side. Orochimaru still attempted to gain the title of Hokage, but he was looked over as a candidate due to his thoughts that were far from kage's. Orochimaru left Konoha, seeing no reason to stay any longer. Soon after, Orochimaru developed a craving to destroy his former home.

This now evil-being joined up with the Akatsuki only to be kicked out after a failed attempt to steal Itachi Uchiha's sharingan. Akatsuki sent Kabuto to go spy on Orochimaru, which backfired as Kabuto became Orochimaru's right hand man.

Orochimaru soon took control of Rice Field Country and aquired villages full of ninja who were loyal to him.

Being depicted as almost invincible, Orochimaru makes a good template for what is normally in Lotgd the Final Boss, the "Dragon." In SL Orochimaru is the Final Boss you need to defeat in order to achieve a new rank.

After defeating him, you will be reborn, stripped of all gold, weapons and some other possessions, starting again at Level 1, but with 1 more Orochimaru Kill and possibly a new Orochimaru Kill Title as well.