The Rice Field Country is usually referred to as Sound Country. It plays as the enemy country in Naruto. It was in constant struggle and gather all the citizens together and for that reason, welcomed Orochimaru as their leader. 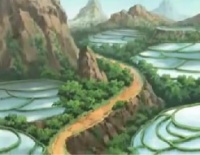 Otogakure no Sato was allied to many countries such as Leaf, Grass, Rain, Waterfall and Sand, but broke many of those ties after Orochimaru revealed his devious plan to destroy the Leaf.

The main characters of Otogakure are Kabuto and Orochimaru. The others of note are the Fuuma Clan who act as gang-like ninja in Otogakure.

Otogakure plays the part of a more side village in SL. It is one of the most easily traveled to places and is home to many evil ninja. The Fuuma Clan plays a part in SL as Hanzaki's Thieves.

The powerful organization known as the Akatsuki is also said to have set up base in Otogakure.