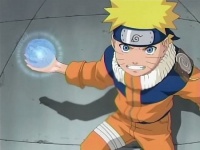 Rasengan is a ninja technique developed by the Fourth Hokage. He wanted to make it a jutsu that combined all elements, but never got to finishing it (he died). Rasengan is a one-handed technique that isn't really a jutsu, as it doesn't require any hand signs. Rasengan is basically a ball of spinning chakra which is smashed into the opponent.

Jiraiya learned this jutsu and soon taught it to Naruto. He broke it down into 3 steps, all training a different part of the necessary chakra control which Rasengan is all about. At the beginning, Naruto needed both his arms and sometimes even a clone's arms to control the chakra and make a Rasengan. Soon enough, Naruto developed Oodama Rasengan and then Wind Release: Rasengan (the way it was intended to be; elements mixed with the chakra).

Rasengan may be aquired in SL. It is a technique that can't be learned through the specialties.

Few have learned such a jutsu in both the game and in Naruto in general. Of course, to learn such a strong jutsu will take a load of training. Afterall, students learn from teachers.

The first step is to have a certain standing with Ero-Sennin (in the event). Think about what he might like and you will figure it out.

If he likes you a lot, you can ask him about Rasengan and he will ask you to fetch a few items for him - then you will train with him (in the event, you cannot go to him directly).