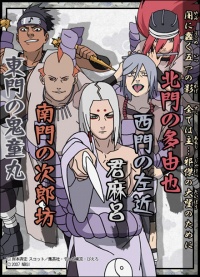 The Sound Five (Sound Four before Kimimaro joined for a short time) were Orochimaru's specialized bodyguards. All were specially given the curse seal by Orochimaru, making them more ferocious than they were before. The Sound Five were able to create numerous special techniques which required all members.

Jirobo is referred to as the weakest member according to other members. He relies on physical attacks, less jutsu involved. His physical techniques aren't like most others'....unless of course lifting boulders with ease is normal. Jirobo is able to absorb chakra, another reason for why he enjoys physical combat.

Jirobo ends up getting into a battle with Choji. He ironically calls Choji fat the entire battle, but Choji didn't let this go in vein. Choji kills Jirobo with a blow to the chest.

Kidomaru is the spider-like member of the Sound Five. Like a spider, he holds six arms, has three eyes, and can even make webs, the webs being his main weapon. He uses his three eyes to shoot webs at unavoidable accuracy while the webs can be as strong as steel. Kidomaru can use these webs as weapons or armor or to just constrict the enemy.

Kidomaru, like a few other members, is cocky and enjoys toying with his enemy rather than just killing them. In his battle with Neji Hyuuga, Kidomaru refers to Neji as a "trash character" and claims he will die first. Kidomaru's self-confidence is rather wrong, as Neji is able to disarm him by sending a burst of chakra through his webs. Soon after Kidomaru dies as he is unable to fend of Neji. 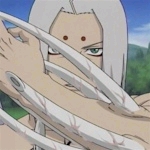 Kimimaro is the only surviving member of the ancient Kaguya clan. He was found as a child by Orochimaru, then felt devotion towards him. Soon enough, Kimimaro saw Orochimaru as almost his guardian, a family-like feeling. Because of this feeling Kimimaro stood by Orochimaru's side, killing any who opposed (and even granted Orochimaru his own body).

Kimimaro holds the Kekkei Genkai of the Kaguya clan, Shikotsumyaku. This gives him the ability to manipulate and grow his bones with his will, even able to regrow lost bones. Each bone move that Kimimaro has, he refers to as a dance.

Kimimaro offered his body to Orochimaru, but there was one problem; Kimimaro suffers an illness that slowly kills him. Now determined to find Orochimaru a new host body, Kimimaro sets out to retrieve Sasuke Uchiha. He is forced into a battle by Rock Lee, Gaara, and Naruto Uzumaki. During these battles, Kimimaro is almost able to achieve victory, when suddenly his long time deadly illness finally kills him.

Sakon and Ukon share a spot in the Sound Five. They are twin brothers who look very much alike (Sakon wears a beaded necklace around his neck, Ukon doesn't). Sakon and Ukon hold a unique Kekkei Genkai, the ability to merge bodies into one with one another or with an opponent. Ukon is usually the one to merge into Sakon, giving him extra limbs and such to help attack and defend. When combining with an opponent, Sakon and Ukon can "infect" them and slowly kill away their cells. There is one problem with this though, any damage that the opponent takes while Sakon and Ukon are in the body, Sakon and Ukon take that damage too.

Sakon and Ukon have different personalities. While both are very foulmouthed, Sakon enjoys toying with his opponents while Ukon is impatient and wants to get the job down quickly. The Sound Five all get into a set of battles, as do Sakon and Ukon. They receive the privilege of fighting Kiba Inuzuka and Akamaru. Again, the members of the Sound Five are almost able to kill their opponent, Kiba. Yet again, someone (Kankuro) arrives to help, killing both Sakon and Ukon and making them into his puppets.

Being the only female of the group, she is ill-tempered and very...bad. She is a master of the flute, her only weapon (making her fear close quarters combat). To help with her weapon shortage, Tayuya has the ability to summon 3 large demon-like creatures called Doki. She has the ability to control these Doki with her flute, making them attack and defend at her will. And of course, Tayuya's one weapon is not one to overlook. Her flute has the ability (when played) to cast genjutsu of all sorts.

Tayuya gets into a battle with Shikamaru Nara, a lazy guy who's genius mind is just waiting to be used. Their battle is a long, hard one as both were tactical experts. Tayuya gets the upperhand by pure physical force and is almost able to kill Shikamaru. Right before she is able to, Temari arrives. The Wind Ninja manages to break Tayuya's sacred flute, leaving Tayuya without a weapon to fight with. In the end, Tayuya is crushed under trees, rocks, and dirt from the entire forest Temari blew apart.

The Sound Five play an important yet mysterious role. If you manage to find in which country they are hiding, maybe you could encounter them. But what then? Spar with them? Test your skills? Who knows what could happen from the legendary, curse seal holding, bodyguards of Orochimaru.