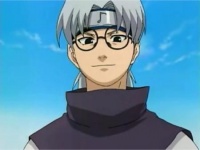 Kabuto can best be described (without big spoilering) as Orochimaru's right hand. Kabuto was originally thought of as an intelligent sound ninja but was soon revealed as Orochimaru's spy quite early in the series during the chuunin exams. Kabuto entered the exams over 5 times, each time dropping out after awhile and each time gathering information for Otogakure.

Kabuto is mysterious, strange, and clever, being at the side of Orochimaru, but yet having his own plans in mind. He is a highly skilled Medical Ninja, calculating calmy what the best course of action is and taking any steps necessary to enforce it. He has shown the ability to keep up with Kakashi and even Tsunade.

Currently he takes the role of a "Mini Boss" who terrorizes the Earth Country and needs to be stopped as he develops some kind of superweapon.

It is not essential to stop him, but in the Hall of Fame you can see not only Orochimaru Kills but also Kabuto Kills as a statistic.

Also you get gold and experience, sometimes gems, from defeating him.

He uses his medical ninjutsu in the same manner an actual player would(he is able the same jutsus).